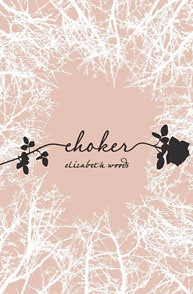 What wouldn’t your best friend do for you? Ever since they moved away from her best friend Zoe, Cara has known what it’s like to be a loner. When an embarrassing incident in the cafeteria gives the popular girls some new ammunition, Cara feels like she hit rock bottom. Her life changes over night, however, when she finds Zoe waiting for her at home one day: Zoe gives her a new look and helps build up her confidence, and Cara begins getting invited to parties and getting closer with popular Ethan Gray. When everything she wanted seems within reach, it all begins to unravel. A girl goes missing, Ethan is the prime suspect, and Zoe starts acting strangely. Trusting your best friend goes without saying, but what happens when you realize you don’t even know who she is anymore.

When I first received a copy of Choker by debut author Elizabeth Woods for review, I didn’t know much about it. I’d seen people talking about it on Twitter, but hadn’t investigated any further. At first, even the book jacket and interior design seemed interesting, but I didn’t quite get it. It took awhile for me recognize that the tree branches acting like a border on the front cover actually showed the perspective of someone laying in the grass, looking up through the trees. With the title, it was hard not to connect the image with the perspective of someone who was being choked to death — a thought that put a chill down my spine. When I wrote the What’s In My Mailbox? post in which this book was featured, it received an overwhelming number of “read this book first” votes, and after having read the book completely, I’m glad that I checked it out when I did.

When I was about 40 pages into the book, I was sure I knew where this YA Gothic novel was going. One of the most popular girls at Cara’s school ends up floating in the pool, and I was sure I knew who had helped get her there (if she, indeed, was helped there). No one wants to be able to guess how a thriller is going to turn out when they’re only about 1/5 of the way through the book, but I was so wrong. You’ll want to stick around for the huge plot twist! I started having an inkling that the ending was possible before the big reveal, but the truth of this novel and the characters is much bigger than I could have imagined.

Not only does this debut author have a good understanding of how to build up the suspense and build up a great plot twist, but also she has an amazing mastery of building up the elements of the setting to make them believable. She writes concise, visual descriptions of important scenes, complete with details like, a few bits of red peeling paint on an otherwise unpainted or stained building. Details like these permit the reader to have a clear picture of the events, and if Woods’ only did this, then it would be good. However, Woods is able to bring the world to life in a way that I haven’t seen very often with frequent references to smells of both places and characters. Whether it’s a pleasant scent like fresh air or fallen leaves or less than pleasant odors, like stale underarms, rotting food, or bad breath, the author allows readers to get right into the scene.

While Choker has all the elements of a thrilling suspense and Gothic novel, it also has key features of a chilling contemporary issue book. On the one hand, the image of a doppelganger, or an evil twin, is of key importance to the Gothic narrative. While on the other, at five years old, we’re told that Zoe used to come crying into Cara’s room because of her “horrible stepdad.” I’ll leave you to your own assumptions about what he was doing to her. These images and issues become further complicated the further into the novel you get, and they aren’t all fully resolved. I, for one, don’t think that this lack of resolution speaks against the author’s abilities as a writer. If anything, it makes you keep thinking about the novel late into the night, chilled to your very bones.