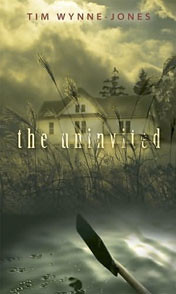 Mimi Shapiro feels that her life in the Big Apple is crashing down all around her. So when her father presents her with the opportunity to spend her summer at a remote cottage he owns in Canada, she’s thrilled. Some relaxation and the chance to sort out her thoughts is exactly what she requires at the moment. On first glance, the quaint cottage peeks her imagination, and she finds the key exactly where he said it would be. However, she’s shocked by the gruff welcome she receives from Jay – a musician – who has been occupying the space. Imagine who she feels when he accuses her of leaving him some creepy and threatening tokens, including dead birds, since she’d only just arrived. Who is leaving these threatening messages and what do they want with Mimi and Jay?

Sound like the basis for a thoroughly suspenseful and chilling thriller? Tim Wynne-Jones‘ The Uninvited really is a great Gothic thriller set in a remote Canadian town. From the opening moments, Mimi is enchanted by the cottage and the snye (read the book to find out what this is) on which it is built. On the one hand, it brings to mind Snow White and gingerbread houses, but there is something else as well. Somewhere, below this fairytale-like surface, there lurks something a lot more chilling, someone who watches, listens, and leaves messages for both Jay and Mimi. Could what they don’t know hurt them?

Written from the perspective of three 20-somethings — Mimi, Jay, and Cramer — this novel offers a well-rounded view of the events and motivations of each of the main characters and shows what they’re willing to do to get what they want, even if it infringes on the desires and rights of the others. Of course, in addition to Cramer, Mimi, and Jay, there are other creepy characters lurking around the snye and the life that Mimi was running from in NYC hasn’t necessarily stayed put. TheUninvited is a great thriller, but it is also a lot more than that. It’s also a family drama, just not of the tearjerker variety. It’s more of the hold-your-breath and hope-for-the-best type.

I don’t want to give away any spoilers, because in this book in particular, having even a single spoiler might very well ruin the novel for you, and you wouldn’t want that, would you? What I will say, however, is that while some other people have stated that the book is really predictable, I personally didn’t know who was the ultimate baddie in this whole thing until nearly the end, and even then I wasn’t sure until the events played out entirely. Of course, your ability to discern the inner-workings of a plot might be better than mine, so just keep that in mind. For my part, however, this novel was a thrilling, page-turner of a novel, and I can’t wait to check out the author’s upcoming thriller, Blink & Caution, which is set to be released March 2011.

I, for one, hope that you enjoy The Uninvited as much as I did.

2 comments for “The Uninvited”