The Rules Of Survival

by Melissa Montovani on February 3, 2011 in Realistic Teen Fiction • 0 Comments 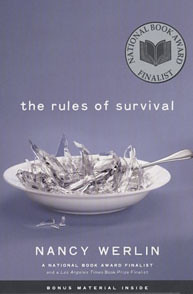 For Matt and his two younger sisters, Callie and Emmy, everyday is a struggle to survive from the unpredictable nature of their mother, Nikki. Nikki was called “[o]ne of literature’s most despicable mothers” by a reviewer at Publishers Weekly when The Rules Of Survival, and Nancy Werlin was a finalist for the National Book Award when it was originally published. If these recommendations haven’t won you over already, then read a little further because I have a feeling that this powerful story will win you over too.

The Rules Of Survival is Matt’s recollection of the Walsh children’s harrowing day-to-day life, written two years after they’ve left their mother’s care as a letter/explanation of the events to Emmy. Matt thinks that maybe she will need to know the details of what happened to them as she gets older, and at the same time, it gives him the chance to think through the events for himself. Events like the time when Nikki brought home the ingredients to make seafood paella and hit Matt repeatedly across the face because he was trying to clean up and any number of other times that she put her children’s lives in danger or caused them to live in fear all the time.

While there are some really upsetting moments in this novel, this is also a story about hope and survival. Matt lived until he was 13 years old without ever thinking hope was possible. However, when he and Callie witness a scene in which a man named Murdoch stands up to someone who is screaming at a young boy, things change. He saw something in Murdoch that night, which made him think that this man could save them. And so begins this tale, a tale that is fragmented as is to be expected from a narrative about a young teen’s survival from devastating emotional and physical abuse. The glimmer of hope that he feels that night blossoms into a life that Matt feels is almost good when Nikki begins dating Murdoch several months later, but of course, the “good life” is short lived.  Hinging on whether Murdoch will agree to help them out or will look the other way just like the other adults in their life and force Matt to take care of the situation himself, this story will keep you in its grip till the very end.

I couldn’t put this book down, but I didn’t love everything about it. One of the things that I really loved about this novel was the way in which Werlin demonstrated how draining and manipulative Nikki’s behavior was. If Matt, Callie, Emmy, or her sister Bobbie tried to do something nice for her or for their home, they could never tell how she would react to it: one time she might join in, while the next she’d be moody and insist on doing something else. In this way, Werlin is great at showing how Nikki’s behavior affected those around her.

At the same time, since the entire novel is written as Matt looks back on his past, it often felt like the reader is very much distanced from the action. Is this meant to reflect Matt’s desire to distance himself from the action as much as possible…yes, perhaps that is the case. From the way in which Matt attempted to shield both Callie and Emmy from Nikki as much as possible, it may have been a means of censoring some of the information from his youngest sister as well as from himself. Of course, censoring the info for his sister and himself means that there are, inevitably, things that the reader doesn’t know about. I’m still not sure how I feel about that aspect of The Rules Of Survival even though I finished this novel a few days ago.

What do you think…in stories of emotional and physical abuse, does there need to be some distance from the reader? Should the author make it obvious to the reader that some periods of time were skipped over or should they just go unnoticed and unmentioned? I’d love to talk this over with my readers, so feel free to leave your thoughts.

Buy The Rules Of Survival today and save 15% off the regular price!

← How Does YA Lit Inspire You?: L.M. Preston Talks About Being A Writers Advocate
Book Trailer Talks: Fave Elements Of Book Trailers →