by Melissa Montovani on February 7, 2011 in Realistic Teen Fiction • 0 Comments 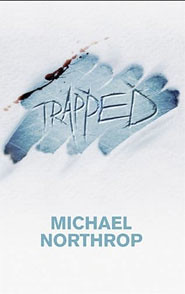 On the day that the blizzard started, no one expected that it would last for a week. For those in it’s path, it was more than a snow day or two. It was a matter of self-preservation — of keeping warm, of keeping alive. In Trapped by Michael Northrop, Scotty, Jason, and Pete are three friends, who are among the last seven students waiting to be picked up that day, but they soon realize that no one will be coming for them. Of course, the idea of a sleepover at school with two freshman girls, Julie and hot Krista, doesn’t sound like too much of a hassle. However, the longer they stay inside the school with no power, no heat, and the snow piling up higher and higher, the closer they get to having to make a drastic decision. Will they make the right choice or will something go horribly wrong?

When I first received a copy of this novel to review, I must admit that I was pretty excited. As someone who had grown up in the Niagara Region of Southern Ontario, Canada, I was used to hearing terms like “lake effect snowstorms” and the seemingly tall tales of the blizzard to end all blizzards before I was born, known as the Blizzard of ’77, in which I was told it wasn’t unlikely to find snow piled up to the top of the telephone poles or cars completely buried under the weight of snow. It has always seemed like something rather awe-inspiring to me as a child, and perhaps that was what I expected from reading Trapped for the first time. Not only that but the book design adds to the image I had of the book, with snow-covered pages marking the passage of time and the progress of the storm. However, I have to say that while I liked the novel overall, it didn’t reach the grotesque or Gothic fascination of the childhood stories I heard of a similarly overwhelming snowstorm.

On one hand, part of the problem was that I was expecting to read a story that relied more heavily on the Gothic aspects of the situation and that just didn’t happen. Rather than a suspense story, it’s much more closely aligned with the genre of contemporary YA novels. This information made a lot more sense when I realized that this is one of the novels for the Contemps Challenge, which I’m participating in, so keep that in mind if you decide to pick it up. In fact, at a key point towards the end of the novel, the main character Scotty suggests that him and the other six students were a pretty random assortment of students, which brought to my mind the 80s movie The Breakfast Club. I guess you could say it’s the brat pack with a whole lot of snow and updated slang (which is a good thing in my opinion).

Looking for more positive points? Well, at times, the contemporaneity of this novel surprised me. Cell phones, iPhones, text messages, and Facebook profiles I expected, but some of the jokes and other allusions to popular culture, including various popular apps, were great and unexpected. Another thing that I loved was the author’s decision to demonstrate that teens can be ingenious and have a great amount of inner strength as, in that way, it can be a very empowering novel. I don’t know if I would ever have such great survival skills as they all seem to have, but I think that the general teenage “invincibility” explains a great deal of how they are to do what they need to, when they need to do it.

Finally, you can’t review this book without emphasizing that Scotty and the rest of the boys in this novel really do think and act like one would expect a teen boy would. Does this mean that, perhaps, it would appeal more to teen boys than girls…yeah, I think that is accurate. Even if this novels didn’t quite live up to my expectations, there are a number of gems throughout this story that will charm all readers.

Buy Trapped today and save 42% off the regular price!