by Melissa Montovani on June 21, 2011 in Realistic Teen Fiction • 0 Comments 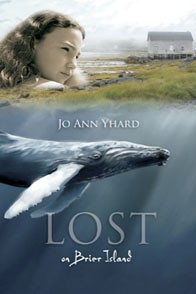 Brier Island is a small island community on the westernmost point of Nova Scotia. It’s a place where everyone knows who you are and what’s happened to you, which makes it exactly the kind of place that 14-year-old Alex would want to be after experiencing a terrible tragedy. Instead of doing things like going to the mall, she comes to visit, or rather, her parents make her visit her aunt on this small island for the summer. What Alex didn’t expect was that she’d get attached to a baby whale that she names Daredevil. When she and Daredevil are in danger, can Alex save him and herself before it’s too late?

Lost On Brier Island might be JoAnn Yhard‘s first YA novel, but she isn’t new to writing for a younger audience. Her first middle grade novel, The Fossil Hunter of Sydney Mines, was a Canadian bestseller, and after reading her most recent novel, I’m confident that it’ll be successful as well. Her writing captures the character and beauty of the Canadian distinct setting in a way that will evoke nostalgia for a place that is familiar to some of the novel’s readers or a desire to visit it for the first time. In particular, the animals and flora that inhabit the landscape are sure to be a hit with a younger preteen and teen audience, just as they are with the main character.

While Yhard has a beautiful backdrop for her story, her story isn’t without it’s difficult moments. When writing about difficult subject matter, like the tragedy Alex faces, many authors broach the topic immediately in a forthright way. However, Alex doesn’t want to talk or even think about the experience that brought her to Brier Island right away. She pushes her aunt away in a realistic way when she suggests that Alex can talk with her about anything. Thus, Yhard doesn’t reveal the circumstances with which Alex is dealing immediately through the character’s thoughts or otherwise. Instead, she stays true to the character, and slowly reveals more details about what Alex is going thorough with her thoughts, dreams, and finally, words. By giving Alex a chance to come to terms with her experience, Yhard develops her audience’s trust in her understanding of teens and will likely become an author that readers come back to repeatedly.

Finally, I think readers will be as enamored with Yhard’s depiction of her secondary characters as they will be with Alex. Details that are unexpected, such as Gus’ – a whale watching tour guide – immaculately clean hands are never for naught. In the writing of some other authors, they might become a detail that is never fully utilized, but Yhard offers up a realistic back story for it later in this novel. If smaller details are drawn so vibrantly, then you might imagine that larger aspects of these characters would be even more rich, and you wouldn’t be wrong.

From the richly-drawn characters and psychologically realistic behaviors to the well-defined setting and plot, Lost On Brier Island will reward readers looking for a contemporary novel that deals with emotionally difficult issues in a thoughtful and realistic way.

Buy Lost On Brier Island today and benefit from free shipping and 14% off the regular price!