by Melissa Montovani on May 20, 2013 in YA Historical Literature • 1 Comment 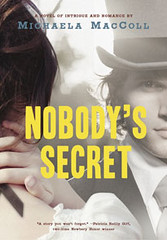 On a day when fifteen-year-old Emily Dickinson is doing everything she can to avoid helping with the laundry, she meets a young man who is as mysterious as he is handsome. In a town where everyone seems to know who she or her family is, she’s surprised to realize that he not only doesn’t know who she is, but also he playfully evades telling her who he is. Readers of Nobody’s Secret by Michaela MacColl and Emily herself both enjoy the brief and clandestine flirtation that she has with Mr. “Nobody” until he’s found dead in the pond on her family’s property. Can Emily discover who he is before he’s condemned to an unmarked pauper’s grave? The secrets of Amherst, a blossoming romance, and danger wait at every turn in this well-researched YA mystery novel that celebrates the intellect and attitude of a beloved American poet while readers find themselves unable to put it down.

While no one ever wants to be able to predict where a story is going from the first page, it’s even more imperative that a mystery novel’s plot twists aren’t obvious. With Nobody’s Secret, MacColl does one better: she makes you so certain one thing is going to happen that you keep reading to prove you’re right, only to find that you weren’t. Of course, MacColl leaves clues for Emily and the reader to pick up all along, which will lead her characters and eventually, the reader to the ultimate, whodunit answer. Teens, who like either mystery or historical novels, will appreciate this book.

One of my favorite parts about this novel, other than the fact it wasn’t predictable, is how MacColl uses Emily Dickinson’s poetry in order to illuminate who she might have been as a teenager. She prefaces each chapter with a line or two from a poem, which corresponds with its theme and is the perfect way to give teens an interest in reading each poem in their entirety. Moreover, I noticed that at times, the language she uses either as part of Emily’s thoughts or the dialog that she has with Mr. Nobody, for example, mirrors one another, demonstrating for the reader that there is a connection between the authorial voice in Dickinson’s poetry and who she may have been as a teen. Why do I say may have been rather than how she was? Well, all of the historical information available suggests that the real Emily never began writing poetry until her 20s, and yet, the means by which MacColl inserts her poetry into the context of Nobody’s Secret are not only believable, but also give the reader an opportunity to connect with Dickinson’s writing in a way that might have escaped them before. If readers have even a small inkling that the character of this poet from the 19th century might have felt some of the same things as they do, then perhaps they will see a kinship with them where before their was only a separation of time and culture.

For those who are only looking for a pure, by-the-historical-record-kind of read, Nobody’s Secret may disappoint. However, I suspect that many more teen and adult readers of YA will appreciate MacColl’s interpretation of Emily Dickinson and love exploring what may have happened if she ever had a crush on an older boy, who winds up dead a few days after she meets him. Pick up a copy today and get ready to immerse yourself in this fun story.

Buy Nobody’s Secret today and save 27% off the regular price!

← Is the Kobo Aura HD worth the hype?
Reputation and Rebellion in Nobody’s Secret →